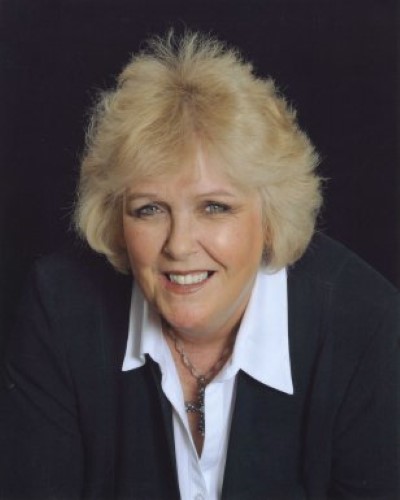 Quote: Our deepest passion lies within educating as many people as we can about Schizophrenia a very misunderstood condition. We are horrified to think that until this happened to our son we too had very judgemental ideas.

Georgina Wakefield was born on 29th October 1947 and has lived in Grays in Essex since the age of 7. Her father, Emanuelle Shinwell suffered from Bi Polar Disorder, he was named after Lord Manny Shinwell who was his uncle. Her mother was Principal Fire Control Officer for the whole of Essex, before retiring.

“I’m often asked why I chose this path, the answer is simple – people who suffer from mental distress deserve our respect but sadly it’s very thin on the ground. Why? ~ we don’t do enough to educate the public. When we made the decision to appear on National TV we knew that this was probably our one and only chance to educate a large number of people. We received 84 letters and emails from people who thanked us for going public, living proof that people do want to learn.”

Georgina Wakefield is a media volunteer for Rethink and has helped them with many projects including their recent anti-stigma campaign. Anyone who hears Georgie speak or reads her books cannot help be moved by her passion to improve services for all carers and users and raise awareness of some of the wider issues involved.
Georgina teaches on the three clinical short courses in the section of Mental Health Nursing, and is an honorary lecturer at the Institute of Psychiatry, providing both a carer and user perspective of recovering from schizophrenia and bipolar disorder. She is also an examiner for these three courses and runs workshops on the subject. She delivers presentations to a wide variety of audiences using a unique and very memorable delivery style which includes a mix of family experiences, poetry, statistics, information and training techniques.
Georgina also runs ‘Spotlight On Schizophrenia’, a management consultancy offering advice to mental health carers and training to practitioners at all levels.”
In addition to her work for the Institute Of Psychiatry, she works with several NHS Trusts and universities and has spoken publicly at many national conferences. Georgina has also undertaken consultancy work for the voluntary sector, eg Mind Rethink and MACA and Tom Dodd National Lead for Dual Diagnosis CSIP. She also worked for 2 years as a fellow for Carers Nimhe Eastern Region.

Often described as the morbid Pam Ayres, she manages her own on going recovery through speaking and writing poetry about her experiences. She has written a number of books and alongside the family has been part of a BBC 2 documentary on living with mental illness called “My Family Loving Christian”. Georgina and her family have also taken part in eight other films highlighting the carer’s perspective and the benefits of Direct Payments.

Georgina has worked on many written articles for newspapers, newsletters and magazines eg: An Exploited Love, The Worst Night Of My Life, A Pool Of Ignorance, At Last I’ve Got My Son Back, Watching The Wakefield’s to name but a few and published by Mental Health Today, Community Care and Prima magazines. She also contributes to many newsletters and local papers.

Georgina is currently involved in the “Who Cares Project?” with South Essex Partnership University Foundation Trust, this project involves attending planning meetings and delivering training to NHS staff [paired up with a Carer Recognition Worker]. The staff will go back to practice as Carer Champions, they will be there to provide support, information and guidance to carers and signpost them to the various agencies who can help them.
Georgina continues to write and some of the poems from her books are available online to read. In addition to this, her books are available to purchase through the website. She is accomplished in public speaking and training based on developing understanding of mental health and sharing practical tools for supporting people with mental illness. She has first hand experience of the SYSTEM and SOCIETY as both a service user and a carer which is used to take people on a journey that enhances knowledge and develops understanding of the damage that stigma and ignorance causes.

“We Help professionals to balance their academic learning with experience of how it feels from both sufferer/carer perspectives to assist the development of interpersonal skills, in particular humility and compassion.”

Due to recent funding secured from Novartis Pharmaceuticals, a filmmaker has cut and edited 5 of our films to produce an educational DVD which will be free of charge and can be used to educate a variety of people including mental health carers entitled “Schizophrenia The Whole Picture”. Georgina intends to contact her colleagues in the mental health arena to support her in copying and distributing the film.

My Family Loving Christian: A 50 minute documentary film produced by the BBC
Relative Values: Georgie and other carers discussing their lives and problems by Care Services In Partnership
All In The Mind: an anti stigma film by Ilona Blythe [Student]
Christians Journey: by Tom Dodd Department Of Health
Christians Story: the benefits of Direct Payments by Robin Murray-Neil Department Of Health
Time To Change: Rethink
Awards Night: by Thurrock Council
UKPPG Conference 2009
Schizophrenia The Whole Picture
The Marian Beeforth Legacy University of Brighton

Current and Past Clients

We're not around right now. But you can send us an email and we'll get back to you, asap.